In the preface of his book Essential Scrum, Kenneth Rubin writes “giving a new Scrum team just The Scrum Guide and expecting good results would be like giving a new chess player a 15-page description of the rules of chess and expecting her to be able to play a reasonable game of chess after reading it.”

I like this analogy as the basic rules of Scrum seem simple, but a successful Scrum project, like a good chess game, depends on the ability to use these rules in the game context. Like Scrum, a chess game starts with a limited set of simple rules and six types of pieces. It is however the diversity of the situations that makes difficult to play chess at high level. Incidentally, chess has also a “timeboxing” feature as you are allowed only a limited amount of time to make all your moves. I admit having had only a limited practice with chess years ago, but I think that ScrumMasters and project managers could be inspired by some of the chess masters’ best practices. 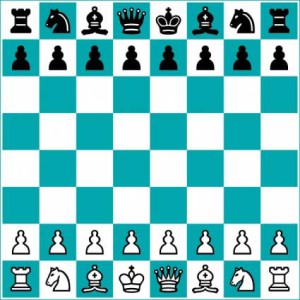 There is however a big difference between the game of chess and Scrum: people are not pieces that you can manipulate at will. The moves of chess pieces are strictly regulated. Their number and characteristic defined at the beginning of the game. Personal reactions of Scrum team members are not (completely) predictable or logical. On the positive side, the ScrumMaster could be able to create its own team or change team members in case of problems. Being a good chess master, ScrumMaster or software developer is also based on how much theory and experience, yours and those from others, you can use to think about when you have to solve problems. Nothing replaces the time you need to spend to acquire it. And this could be the last lesson from the chess masters: even if you are talented, you have to work hard to become one.